The arrival of Nvidia’s RTX 40-series for laptops is significant news for PC gamers, and contrary to rumours, the new portfolio has something for everyone.

Depending on the game in question, the new GPUs based on Nvidia’s Ada Lovelace architecture should provide a significant performance boost over the earlier RTX 3000 series.
Additionally, the RTX 4000 series is more efficient with energy. The new mobile GPUs from Nvidia are said to be able to reduce power consumption by as much as two-thirds compared to the RTX 3000 while maintaining the same level of performance.
Only the RTX 4000 series supports Nvidia’s frame rate boosting technique, DLSS 3, which the company claims can raise performance by a factor of three to four.

Nvidia is set to debut the mobile RTX 40 “Ada” range alongside the desktop RTX 4070 Ti, following the successful launches of the RTX 4090 and RTX 4080 in 2022. This time around, the company is attempting a new tactic, as it intends to cater to a larger price range with its mobile graphics cards.

The Nvidia product family can be broadly classified into two tiers: mainstream and flagship. Flagship products are the RTX 4090 and RTX 4080 mobile. Nvidia claims to have achieved “60 frames per second (fps) surround gaming” in 4K, that 3D cooperation in Nvidia’s Omniverse is possible at a fluid 4K 60 fps, and that video export speeds can be increased by a factor of up to two.

When it comes to mobile graphics, the RTX 3080 Ti was the highest end of the spectrum in the previous generation. With the release of the RTX 4090M, Nvidia has brought its flagship mobile GPU to laptops. With a boost frequency of up to 2,040MHz and 16GB of GDDR6 memory, the GPU has 9,728 CUDA cores.

We anticipate seeing this GPU in some of the greatest gaming laptops of the year, alongside Intel’s forthcoming Raptor Lake mobility flagship.

The RTX 4080 mobile version is next. Recent leaks of test results show that it easily outperforms its predecessor, the RTX 3080M, by a factor of 42%. Seven thousand four hundred and twenty CUDA cores, twelve gigabytes of RAM, and a maximum boost frequency of 2.28GHz are all standard features on this model.

The mobile version of the RTX 4070 dominates the market for mainstream laptops, and there is a sizable performance gap between the RTX 4080 and the RTX 4070. The 4070 has a maximum clock speed of 2,175 MHz, 4,608 CUDA cores, and 8GB of GDDR6 memory. The GPU still has enough capacity to run numerous games, so this laptop could become popular among those who want a nice alternative without spending a fortune but still want to play the latest games.

Nvidia’s main focus in the mass market is performance per watt, and the company claims that its new GPUs will match the RTX 3080’s performance while using only a third of its power. The computers can supposedly finish a 2.5-hour render in 10 minutes or run a game at ultra settings at 1440p at 80 frames per second.

Although Nvidia released its desktop graphics cards in a staggered fashion, many laptops will soon be able to take use of the RTX 40-series cards.

Having said that, the mobile RTX 4000 series won’t be as formidable as the desktop line. Laptop graphics processing units (GPUs) can have significantly lower capabilities than those claimed by Nvidia. Therefore, despite the similar names, you should not assume that the GPUs will deliver equivalent performance. 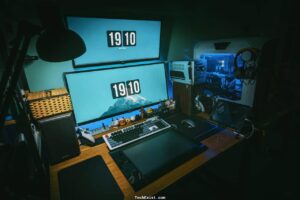