Intel has had a rocky start. Intel had problems with low volume availability after releasing just slower A380 Units in the Asia region, and again when launching the ARC A770. In addition, software problems have been rampant, delaying updates even after the hardware has been released. This study was delayed because Intel lacked sufficient evaluation units. With a few notable exceptions, this meant that YouTubers were often given preferential treatment over more technical media. The good news is that Intel drivers have continued to advance in a constructive direction ever since their introduction. As a platform, we found the ARC A700 series to be quite reliable, with respectable performance in DX12 games but subpar results in DX11.

Keep in note that these cards rely heavily on Resize BAR capability, thus your PC shouldn’t be more than a few years old if you plan on installing an Intel ARC card. Install the newest BIOS firmware for your motherboard and turn it on. If not, it will still function, but you will notice a considerable decrease in performance. CPUs from Intel’s 10th gen or AMD’s Ryzen 3000 series are required for the Arc A770 and A750. Resizable BAR is a feature of modern CPUs that substantially improves the performance of Arc Alchemist cards. The cards will function with earlier CPUs if ReBAR is disabled, but performance will suffer significantly.

Intel’s XeSS is built into the GPUs in many ways, and it is the foundation of the company’s DLSS and FSR implementations. Intel Arc Alchemist gpus provide an upscaling capability called Intel XeSS, or Xe Super Sampling. For this to function, your game must be rendered at a lower resolution than usual before being upscaled utilising the GPU’s built-in machine learning and AI capabilities. This allows it to maintain a high level of image quality while yet keeping a high level of performance.

Similar to Nvidia’s Deep Learning Super Sampling algorithm, XeSS (DLSS). The main distinction is that DLSS is only available on Nvidia graphics cards, while Intel XeSS works with a wider variety of graphics card manufacturers.

Intel was able to accomplish this by releasing two variants of XeSS: one for use with Intel’s Arc GPUs (such the Arc A770 and the Arc A750), and another for use with graphics cards from other manufacturers. The version optimised for Intel Arc is more likely to perform better thanks to its superior upscaling model and the additional processing power provided by Intel Arc’s Xe Matrix Extension (XMX) AI cores. The XeSS that AMD and Nvidia users can try out isn’t as powerful as Intel’s XMX cores because it’s less complicated. This is especially true of the upscaling model and the DP4a instructions.

In the interests of ARC Intel has developed an application called ARC Control. It functions effectively, although its uses are currently somewhat restricted. Some tinkering and monitoring features are included, though. This suite’s major drawback is that it can’t function independently of a game at any time. It floats above everything else on your screen, but until it’s closed, you can’t do anything but use the Arc Control programme.

According to yesterday’s blog post, it seems that Intel only uses the DXVK translation layer in some circumstances; its driver will take a hybrid approach, making use of a variety of API techniques that exploit translation layers in conjunction with one or more up-to-date API implementations on an as-needed basis. Therefore, Intel will not use DXVK for all DX9 processing and will only use it where it can give greater performance than Intel’s DX12 emulation method.

In its original blog post, Intel never said it was utilising DXVK, but thanks to Gaming On Linux, we know that DXVK translation is what Intel is referring to because of a readme article Intel published on the same issue. It is currently unknown how efficient DXVK is with Intel’s solution; nonetheless, the translation layer must be a very efficient option for Intel to include it in their most recent driver.

However, native DX9 compatibility has been removed from Intel’s Arc GPUs and the related Xe integrated graphics. Instead than relying on any sort of native renderer emulation, Intel has decided to only use translation layers. An example of this is how Intel uses the Microsoft D3D9On12 mapping layer, which is responsible for translating DX9 commands to DX12.

While using translation layers isn’t ideal, it does provide Intel with an immediate win in terms of DX9 GPU performance. Intel can leverage DX12 optimizations for both newer DX12 games and older DX9 games thanks to translation layers, drastically reducing the amount of time needed to optimise both sets of APIs. Intel had to do this since its competitors, Nvidia and AMD, have been working on DX9 drivers for discrete GPU hardware for close to twenty years and are well-established in the market.

As incredible as it may be, DXVK means that Intel can play DX9 games on Arc without using Microsoft’s DX12 emulation layer. DXVK allows Intel to use Linux or another operating system to play DX9 games, with the potential for improved performance over Microsoft’s emulator. 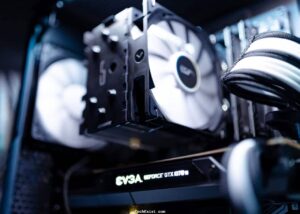